The Tala® language uses natural language syntax to support representation of semantics at the linguistic level of a TalaMind® architecture.

The Tala language responds to McCarthy’s 1955 proposal for a formal language that corresponds to English, though not in the way he sought. It enables a Tala agent to formulate statements about its progress in solving problems. Tala can represent unconstrained, complex English sentences, involving self-reference, conjecture, and higher-level concepts, with underspecification and semantic annotation. A Tala expression is isomorphic to a dependency parse tree for an English expression. Hence short English statements have relatively short correspondents in Tala, a property sought by McCarthy in 1955.

Tala sentences can describe how to perform processes and be ‘executable concepts’, i.e. Tala is a simple programming language, with variables, pattern-matching, etc.

It is theoretically possible and advantageous to use the syntax of a natural language to represent meaning in a conceptual language and to reason directly with natural language syntax, at the linguistic level of the TalaMind architecture. This approach allows addressing theoretical questions not easily addressed by other, more conventional approaches. For instance, it supports reasoning in mathematical contexts, but also supports reasoning about people who have self-contradictory beliefs. Tala provides a language for reasoning with underspecification and for reasoning with sentences that have meaning yet which also have nonsensical interpretations. Tala sentences can declaratively describe recursive mutual knowledge. Tala sentences can express meta-concepts about contexts, such as statements about consistency and rules of conjecture. And the TalaMind approach facilitates representation and conceptual processing for higher-level mentalities, such as learning by analogical, causal and purposive reasoning, learning by self-programming, and imagination via conceptual blends. 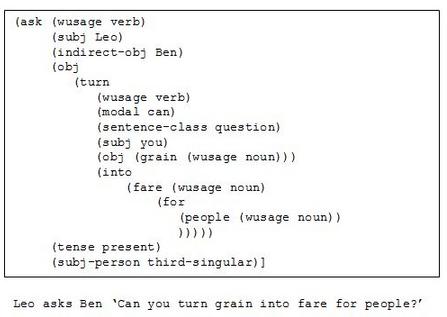