The TalaMind® Demonstration System is a prototype software system, which illustrates how the TalaMind® approach could work and in principle support aspects of human-level AI, if the system and approach are fully developed – although fully developing a functional TalaMind® system will need to be a long-term research effort by many researchers.

The demonstration illustrates how the Tala® language and TalaMind® architecture could eventually support human-level artificial intelligence within a prototype conceptual framework for natural language understanding, self-programming and higher-level learning, curiosity, imagination, mental spaces and conceptual blends, a generalized society of mind, nested conceptual simulation, etc. The prototype implements these features only to a preliminary extent.

The demonstration simulates two stories involving Tala agents named Ben and Leo. Ben is a cook and Leo is a farmer. In the first story Ben and Leo discover how to make bread. In the second story Ben and Leo agree to an exchange of wheat for bread and then perform the exchange, after each thinks about what may happen if the other breaks the agreement.

For the two stories, what happens at each step depends on the initial goals, knowledge, and executable concepts that Ben and Leo have within their conceptual frameworks, and depends on the conceptual processing and communication that Ben and Leo perform at each step, based on their perceptions of the environment and memories of previous events. In this respect, the story simulations are essentially pre-defined within the demonstration framework, even though the conceptual processing may involve creation of new goals, knowledge, and executable concepts.

In the prototype system, only the linguistic level of a TalaMind architecture is implemented for both Tala agents. They communicate by exchanging Tala concepts, which are displayed as English sentences spoken by Ben and Leo. It was not possible within the timeframe and resources available for the thesis to implement the archetype or associative levels of a TalaMind architecture. Abstracting out these levels facilitated creation of the prototype. 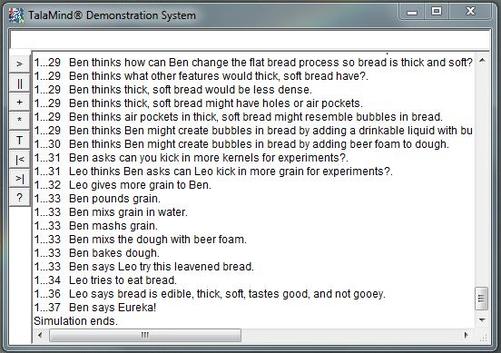 Nature of the Demonstration System